Terrence Howard Is Accused of Violent Abuse. When Is His Time Up?

Terrence Howards Fright Club is a bad idea. The one-hour Halloween-themed special that aired on Thursday night, just in time for Memorial Day weekend, is ill-timed in more ways than one.

Even a spook-fest would be a bad look for Howard, a man who really should know better than to cast himself as the terrifying master of ceremonies in a haunted mansion. No one asked for this Fox special, and Im shocked that Howards PR team let the Empire actor anywhere near it.

On Terrence Howards Fright Club, fans whose only crime is loving the shit out of Terrence Howard are offered an exclusive vacation to meet their problematic fave. Instead, theyre given a window into the real Howard, as the actor spends the majority of their trip cackling from inside a hidden control room while the dream sweepstakes turns into a living hell. Perhaps an A-lister with a less controversial background would have been able to pull off this hosting gig without presenting himself as a cruel sadist who revels in other peoples discomfort and misfortune. But Howard is not that A-lister.

As his first elaborate prank culminates with a die-hard fan screaming bloody murder in his living room, restrained by actors she believes to be cursed, Howard begins to pace with a voodoo doll, screaming, I have the power now!

I have the power to put you on my TV show. Youve been spooked! he announces, confusingly, since the contestant already thought she was being filmed for a sweepstakes special. (Also, who would be excited to learn that their sweating, screaming footage just got picked up for primetime?) Youre my biggest fan and I appreciate you so much, Howard continues.

In addition to raising existential questions like how did they get random people to sign up for this without reading the fine print and why, though, Terrence Howards Fright Club begs us to revisit the many, many accusations of abuse against its host. Fox clearly doesnt care, so somebody has to.

If weve learned anything from #MeToo, #MuteRKelly, and the cinnamon roll recipe Mario Batali attached to the end of his sexual misconduct apology letter, its that men who have done (allegedly) horrible things continue to expect, and to get, unlimited second chances. Apathy is an age-old illness when it comes to these sorts of crimes, especially when the perpetrators are famous, handsome, well-liked, or really good at making pasta. The fact that even #MeToo-era men outed for bad behavior are creeping back into Hollywood's good graces bodes well, I guess, for the abusers grandfathered into collective amnesiamen like Terrence Howard, who was landing jobs in spite of his personal history back when Harvey Weinstein was still an open secret.

Whereas these days the accused are expected to make heartfelt apologies and see themselves out on sexual misconduct sabbatical (ideally early retirement, but who are we kidding), Howard more or less worked through it. His abusive history weaves in and out of his interviews and public persona, somehow managing to coexist with a successful career as Empire patriarch Lucious Lyon. That Howard doesnt shy away from violent roles or terrifying prank specials just shows how unafraid he isunderstandably, since so many accusations never managed to slow him down.

In 2000, the actor was arrested for causing a disturbance when he allegedly assaulted a flight attendant on an airplane. The Smoking Gun reported that, according to police officers, Howard grabbed the flight attendant by the wrist and tried to push her. The charge was eventually dropped for lack of jurisdiction.

The next year, Howard was arrested again in Whitemarsh, PA. According to the police report, the victim, Howards then-estranged wife Lori McCommas, contacted 911 after a phone call with her ex. According to the report, the two were arguing on the phone when Howard reportedly announced, Dont disrespect me by hanging up on me or Ill come over and hurt you. Subsequently, while on the phone with 911, Howard showed up at the victims residence and began breaking the door down. The victim ran to the kitchen and went into the back yard. Howard broke the front door down and ran through the house breaking through the screen door in the kitchen. Howard then grabbed the victims left arm and punched her twice with a closed fist in the left side of her face.

According to the report, when officers did arrive, Howard was forthright and told police, I broke down the door and hit my wife.

In 2013, in response to a series of accusations well get to in a minute, Philadelphia magazine unearthed another altercation from 2005. The report alleges that Howard attacked two strangers, Danielle DiStefano and her fiance Kevin Saffell, because they were seated before him at a diner. When the hostess began seating Saffell and DiStefano ahead of Howard, the actor stepped in front of them and asked why he wasnt being seated first, Philadelphia reported. DiStefano told him that she and Saffell were first in line. Howard told her, Fuck you, I wasnt talking to you.

Saffell, a U.S. Marine, took exception to Howards words and stepped toward the actor and told him to apologize," the magazine reported, citing police and court documents that describe Howard then punching Saffell in the face, dropping him to the ground, then punching him again in the chest. Saffell tried to get up, but Howard continued hitting him, causing him to lose consciousness, according to the police incident report. Charges of assault and harassment were eventually withdrawn, although Howard did plead guilty to disorderly conduct, according to Philadelphia.

Terrence Howards Fright Club begs us to revisit the many, many accusations of abuse against its host. Fox clearly doesnt care, so somebody has to.

In January 2011, Howards second wife, Michelle Ghent, filed for divorce. Her explosive filings alleged a pattern of violence that pervaded their year-long marriage. As previously reported by the Daily Beast, Ghent claimed there were multiple occasions of abuse. During one July 2010 trip to South Africa, she alleged that Howard grabbed her by the neck, threw her across the room, causing her head to hit the corner of the beds headboard. She says he then picked her up and took her to the balcony and said, Im gonna f**king throw you off this balcony. When she screamed for him to stop, he dropped her on the ground. Later, he apologized when he saw the lump on her head.

Howard countered these accusations with his own, such as claims that Ghent assaulted him and called him racial slurs throughout their marriage.

Then, in 2012, Howards on-again off-again girlfriend of ten years, May Seng Yang, claimed that Howard had assaulted her while his current girlfriend, Erica Jiles looked on. According to Gawker, Yang told Whitemarsh police that Howard had choked her, thrown her to the ground and punched her in the eye, then told his girlfriend, Fuck this, Im going to jail for this tonight. Yang also wrote to police that Howard acknowledged during an argument that he had given her herpes. Howard went on to file assault charges against Yang, and the issue was settled privately.

One year later, in the midst of an attempted reconciliation, Howard allegedly assaulted Ghent again. The New York Daily News reported Ghents claims that Howard sucker punched her in the face, grabbed her neck, threw her against a mirror and tried to choke her three times during a July 29 argument in a vacation rental home. She included color photos of her injuries in a legal filing; one showed a badly blackened eye.

When asked about the damning allegations on The Butler red carpet, Howard insisted, As far as me harming somebody, anybody that knows me, I really can't harm a fly, you know? It's completely against my spirit.

And then came the Rolling Stone interview. In 2015, the magazine attempted to profile Howard in an interview that ranged from damning to plain wacky. On the subject of the 2013 incident with Ghent, Howard claimed that she was trying to mace me, continuing, and you cant see anything so all you can do is try to bat somebody away, and I think that something caught her. But I wasnt trying to hit her. He did, however, admit to assaulting his first wife, telling the magazine that, She was talking to me real strong, and I lost my mind and slapped her in front of the kidsHer lawyer said it was a closed fist, but even slapping her was wrong. He also tried to argue that one times one does not equal one, and that this non-truth can be demonstrated through his own language, Terryology, but thats neither here nor there.

Because English, unlike Terryology, can be confusing, Howard later found himself clarifying a 2017 People interview in which he copped to making terrible mistakes. In a Twitter thread, the actor wrote, Ive never been abusive to anyone in my entire life. I have loved and paid the price for love. I am the same loving being since day 1! When I say that Ive made mistakes, it is not regarding violence but judgement. Trusting the wrong people!

This double standard that has permitted abusive women to feel that they can assault a man and not reap where they have sowed is wrong! he continued, adding that, Having an altercation is very different than abuse.

Woman Finds Fox Sleeping In Her Cats Bed, Gets Surprised By The Way It Acts

A ginger cat called George was recently outfoxed when he returned from a walk in the garden to find an uninvited guest had taken over his bed.

“When I came downstairs, and walked passed the kitchen into the bathroom, I did a double take as in the kitchen window I could see a pair of huge ears,” said George’s owner, 47-year-old Meloney Blayze from Petts Wood, south east London. “‘I thought, “hmm, those are not the cat’s ears”, and I turned the light on to look at what was in the cat’s bed – and it was a fox.”

Meloney had woken up at 4am to let George out of the kitchen window and into the garden, but the fox had sneaked in after she’d gone back to sleep and made itself comfortable in the unsuspecting cat’s bed. When he finally returned, George tried to scare the squatter away by hissing at it, but the fox refused to budge until Meloney picked up the bed and tipped the fox out of the window. “He was very tame, he did not want to leave,” she said. Given the cold spell sweeping the UK at the moment, we can’t really blame him! 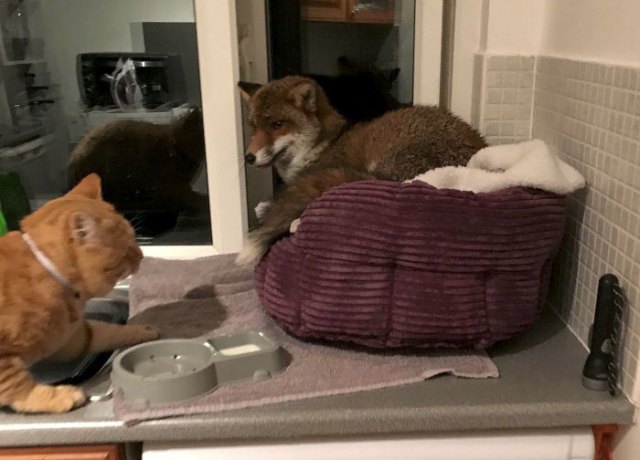 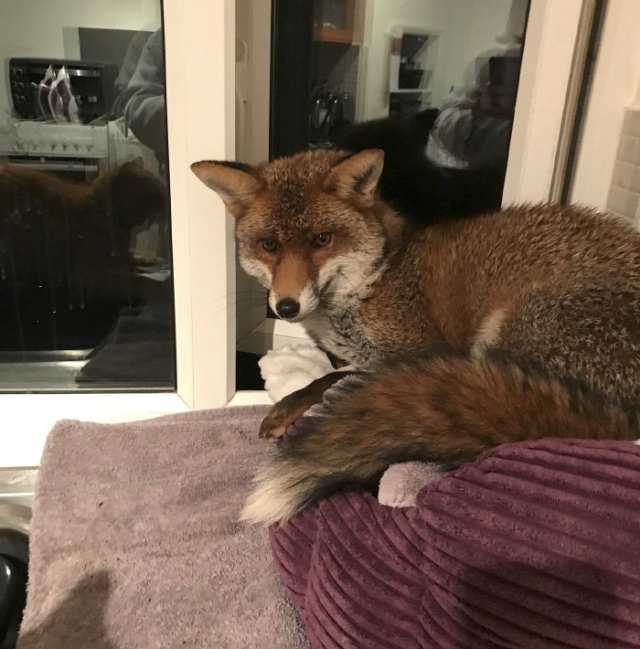 “I looked at him and he looked at me. He was not frightened of me at all” recalls cat’s owner Meloney Blayze 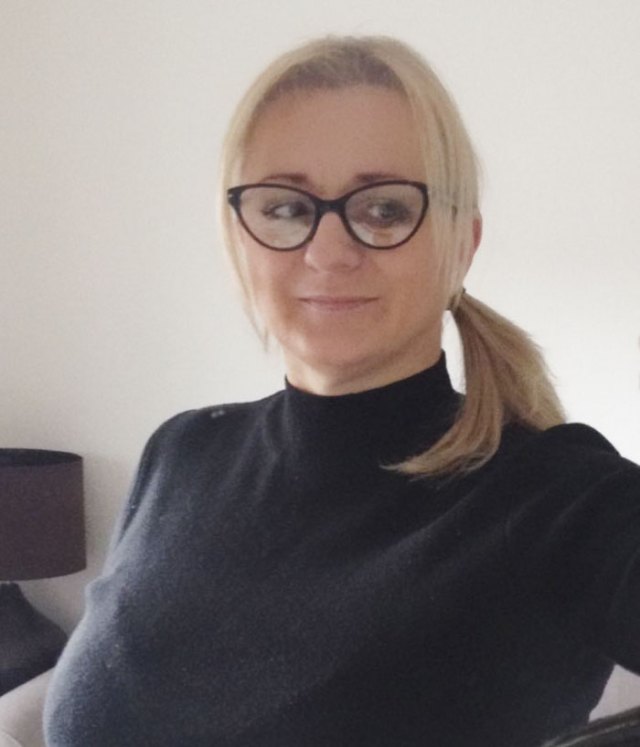 George tried hissing at it, but the fox didn’t move until the cat’s owner Meloney shooed it out of the window 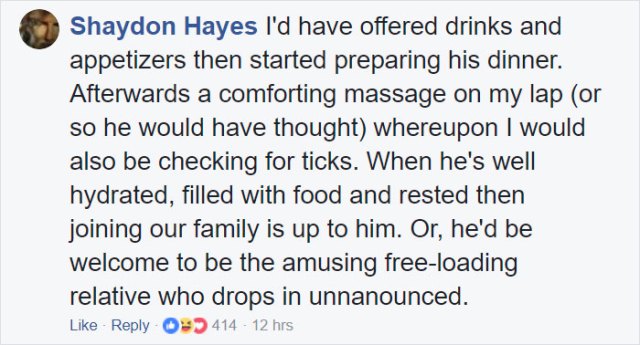 Other people were worried for the animal’s welfare

Almost finished… To complete the subscription process, please click the link in the email we just sent you.