Facebook wants to take over your television with a clip-on camera for video calling, AR gaming and content co-watching. If you can get past the creepiness, the new Portal TV lets you hang out with friends on your home’s biggest screen. It’s a fresh product category that could give the social network a unique foothold in the living room, where, unlike on phones where it’s beholden to Apple and Google, Facebook owns the hardware and operating system.

The $149 Portal TV is the star of the show, turning most televisions with an HDMI connection into a video chat device. And if you video call between two Portal TVs, you can use the new Watch Together feature to co-view Facebook Watch videos simultaneously while chilling together over picture-in-picture. The Portal TV is a genius way for Facebook to make its hardware both cheaper yet more immersive by co-opting a screen you already own and have given a space in your life, thereby leapfrogging smart speakers like Amazon Echo and Google Home.

There’s also the new pint-size 8-inch Portal Mini for just $129, which makes counter-top video chat exceedingly cheap. The 10-inch Portal that launched a year ago now has a sleeker, minimal bezel look with a price drop (from $199 to $179). Both look more like digital picture frames, which they are, and can be stood on their side or end for optimal full-screen chatting. Lastly, the giant 15.6-inch Portal+ swivel screen falls to $279 instead of $349, and you still get $50 off if you buy any two Portal devices. 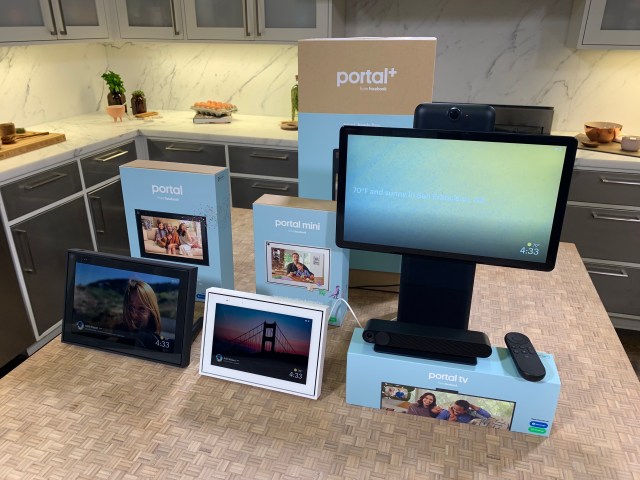 “The TV has been a staple of living rooms around the world, but to date it’s been primarily about people who are physically interacting with the device,” Facebook’s VP of consumer hardware Andrew “Boz” Bosworth tells me at a press event inside a San Francisco Victorian house. “We see the opportunity for people to use their TVs not just to do that but also to interact with other people.”

The new Portals go on pre-sale today from Portal.facebook.com, Amazon and Best Buy in the U.S. and Canada, plus new markets like the U.K., Australia, New Zealand, Spain, Italy and France (though the “Hey Portal” assistant only works in English). Portal and Portal Mini ship October 15th and Portal TV ships November 5th. The whole Portal gang lack essential video apps like Netflix and HBO, and Boz claims he’s not trying to compete directly with Roku, Fire TV, etc. Instead, Facebook is trying to win where it’s strongest, on communication and video chat where rivals lack a scaled social network.

“You’re kind of more hanging out. It isn’t as transactional. It’s not as urgent as when you sacrifice your left arm to the cause,” explains Boz. Like how Fortnite created a way for people to just chill together while gaming remotely, Portal TV could do the same for watching television together, apart.

The original Portal launched a year ago to favorable reviews, except for one sticking point: journalists all thought it was too sketchy to bring Facebook surveillance tech inside their homes. Whether the mainstream consumer feels the same way is still a mystery, as the company has refused to share sales numbers. Though Boz told me, “The engagement, the retention numbers are all really positive,” we haven’t seen developers like Netflix rush to bring their apps to the Portal platform.

To that end, privacy on Portal no longer feels clipped on like the old plastic removable camera covers. “We have to always do more work to grow the number of people who have that level of comfort, and bring that technology into their home,” says Boz. “We’ve done what we can in this latest generation of products, now with integrated camera covers that are hardware, indicator lights when the microphone is off and form factors that are less obtrusive and blend more into the background of the home.” 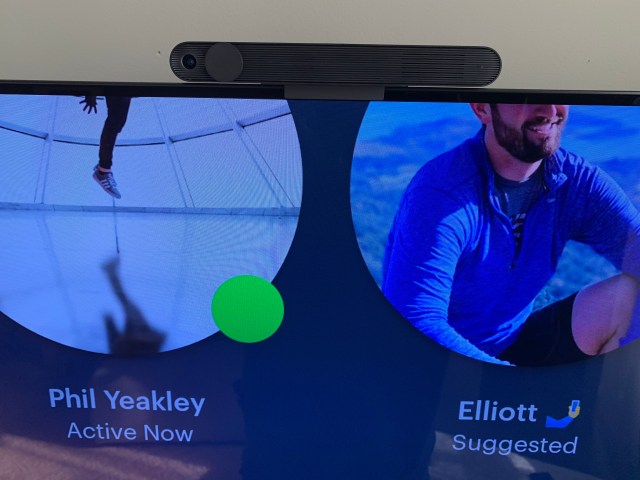 One major change stems from a scandal that spread across the tech sector, with Apple, Google, Amazon and Facebook all being criticized for quietly sending voice clips to human reviewers to improve speech recognition in what felt like a privacy violation. “Part of the Portal out-of-box experience is going to be a splash screen on data storage and it will literally walk through how . . . when we hear ‘Hey Portal’ a voice recording and transcription is sent, it may be reviewed by humans, and people have the ability to opt out.”

But if Portal is battling the perception of creepiness, why make human reviews the default? Boz defended the move from the perspective of accessibility. “We say, ‘oh they’re good enough,’ but for a lot of people that might have a mild speech impediment, a subtle accent, who might use different words because they’re from a different region, these assistants aren’t inclusive.” He claims more voice data reviewed by humans means better products for everyone, though I bet better sales for Facebook wouldn’t hurt. 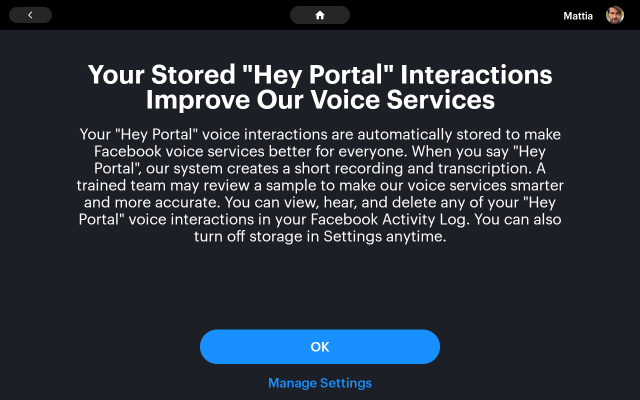 Instead, Facebook is leaning on the evolution of the smart screen market in general to help its camera blend in. “The more value we can create, not just any one player but as an entire industry, that allows consumers to feel — ‘yeah, I both am comfortable with how the data is being used and why.’ ”

One reason Facebook is forging forward despite all the criticism about launching a “surveillance” device amidst its scandals: This is its shot to control its destiny, unlike on phones. Facebook has always been vulnerable to Apple and Google because its app lives in their app stores on their devices. “You don’t have a huge amount of influence over what the phone itself is or what the operating system provides. You’re kind of at the mercy of what those manufacturers or developers provide you,” Boz notes. With Portal, Facebook can ensure communication tech like cameras stay part of the smart home, even if they’re creepy now.

Hands-on with the new Portals

If you can get past Facebook’s toxic brand, the new Portals are quite pleasing. They’re remarkably polished products for a company just a year into selling consumer hardware. They all feel sturdy and elegant enough to place in your kitchen or living room. 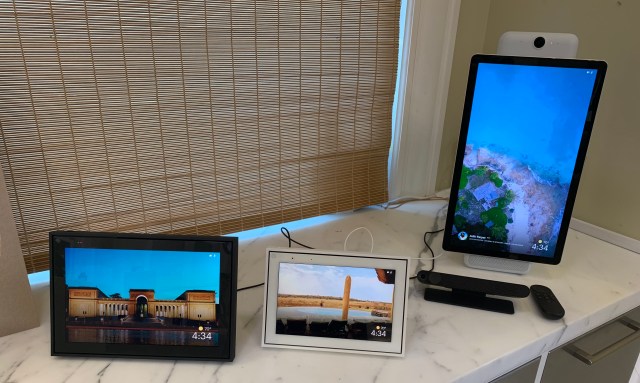 The Portal and Portal Mini work just like last year’s models, but without the big speaker bezel they can be flipped on their side and look much more like picture frames while running Portal’s Smart Frame showing your Facebook, Instagram or camera roll photos. 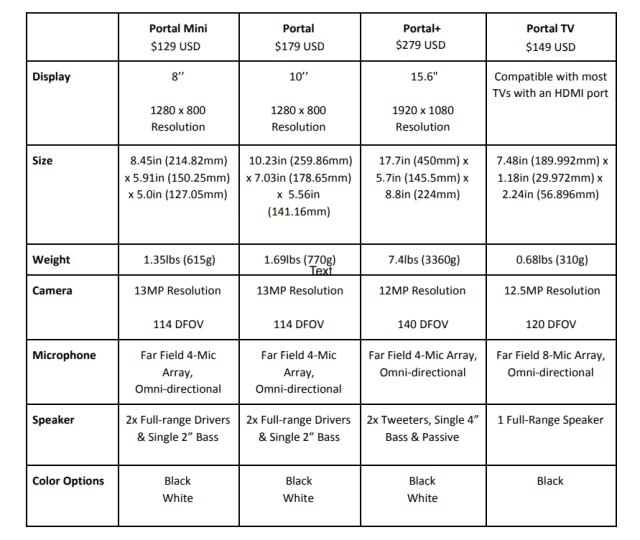 Portal TV’s flexible form factor is a clever innovation, first spotted as “Codename: Ripley” by Jane Manchun Wong and reported by Alex Heath for Cheddar a year ago. It has an integrated stand for placing the gadget on your TV console, but that stand also squeezes onto a front wing to let it clip onto both wide and extremely thin new flatscreen televisions. With just an HDMI connection it brings a 12.5 megapixel, 120-degree camera and 8-mic array to any tube. It also ships with a stubby remote control for basic browsing without having to shout across the room.

Portal TV includes an integrated smart speaker that can be used even when the TV is off or on a different input, and offers HDMI CEC for control through other remotes. The built-in camera cover gives users peace of mind and a switch conjures a red light to signal that all sensors are disabled. Overall, control responsiveness felt a tad sluggish, but passable. 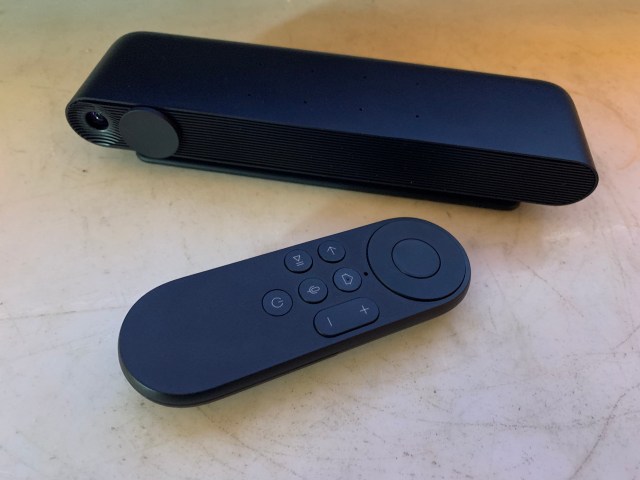 Portal’s software is largely the same as before, with a few key improvements, the addition of WhatsApp and one big bonus feature for Portal TVs. The AI Smart Camera is the best part, automatically tracking multiple people to keep everyone in frame and zoomed-in as possible. Improved adaptive background modeling and human pose estimation lets it keep faces in view without facial recognition, and all video processing is done locally on the device. A sharper Spotlight feature lets you select one person, like a child running around the room, so you don’t miss the gymnastics routines.

The Portal app platform that features Spotify and Pandora is gaining Amazon’s suite of apps, starting with Prime Video while Ring doorbell and smart home controls are on the way. Beyond Messenger calls and AR Storytime, where you don characters’ AR masks as you read aloud a children’s book, there are new AR games like Cats Catching Donuts With Their Mouths. Designed for kids and casual players, the games had some trouble with motion tracking and felt too thin for more than a few seconds of play. But if Facebook gave Portal TV a real controller or bought a better AR games studio, it could dive deeper into gaming as a selling point. 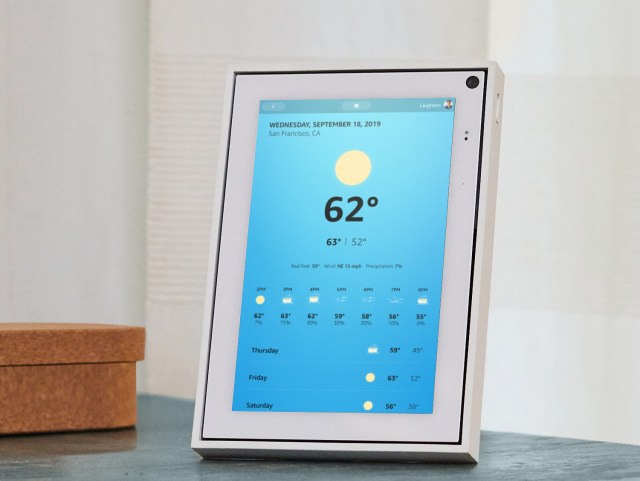 WhatsApp is the top new feature for all the Portals. Though you can’t use the voice assistant to call people, you can now WhatsApp video chat friends with end-to-end encryption rather than just Messenger’s encryption in transit. The two messaging apps combined give Portal a big advantage over Google and Amazon’s devices since their parents have screwed up or ignored chat over the years. Still, there’s no way to send text messages, which would be exceedingly helpful.

Reserved for Portal TV-to-Portal TV Messenger chats is the new Watch Together feature we broke the news of a year ago after Ananay Arora spotted it in Messenger’s code. This lets you do a picture-in-picture video chat with friends while you simultaneously view a Facebook Watch video. It even smartly ducks down the video’s audio while friends are talking so you can share reactions. While it doesn’t work with other content apps like Prime Video, Watch Together shows the potential of Portal: passive hang out time. 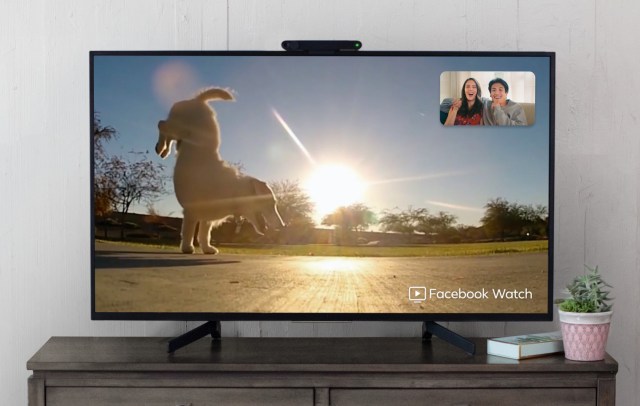 “Have you ever thought about how weird bowling is, Josh? Bowling is a weird thing to go do. I enjoy bowling. I don’t enjoy bowling by myself that much. I enjoy going with other people,” Boz tells me. “It’s just a pretext, it’s some reason for us to get together and have some beers and to have time and have conversation. Whether it’s video calling or the AR games . . . those are a pretext, to have an excuse to go be together.”

This is Portal’s true purpose. Facebook has always been about time spent, getting deeper into your life and learning more about you. While other companies’ products might feel less creepy or be more entertaining, none have the ubiquitous social connection of Facebook and Portal. When your friends are on screen too, a mediocre game or silly video is elevated into a memorable experience. You can burn hours simply co-chilling. With Portal TV, Facebook finally has something unique enough to possibly offset its brand tax and earn it a place in your home.