Martha Stewart and Snoop Dogg are reminiscing about Guy Fieri.

Guy Fieri wants to come on so bad, Martha tells the Daily Dot.

Hes your friend and hes mine, Snoop responds.

Their mutual admiration is in response to a question about which celebrity the pair would invite to compete against them on season 3 of their competitive VH1 cooking show, . Other suggestions include Bobby Flay and the Iron Chef, but ultimately, it doesnt matter who the challenger is, how impressive their culinary pedigree, or how many years of fine dining experience they boast.

Wed whup them, Snoop assures me.

His confidence is well-earned. After a combined 89 years in the industry, Stewart and Snoop are at the top of their respective games, both of them juggling multiple projects. And somehow, theyre not completely exhausted.

They could use a break, though. Were at a Los Angeles press junket in late February,and they filmed until midnight last night—or what feels like 3am for Stewart, whos based on the East Coast. Shes concerned because as an early riser, she keeps waking up at 6am every morning and now shes the most tired.

Because youre three hours behind, Snoop reminds her.

Snoop is also tired, but hes less worried. In reality, he says, This show is so fun that I leave about 12, 1 in the morning knowing I gotta be back the next day. But Im having so much fun, its kind of hard to leave. I wish theyd build me a room on set.

Theyll need their energy because this year, the show plans to kick it up a notch, adding what Stewart describes as an element of friendly competition. Both Stewart and Snoop will be paired with a famous guest as the duos face off in a low-stakes culinary contest supervised by a celebrity judge. The guest list is also getting an upgrade this season, with invites extended to three Jonas Brothers, two Oscar winners, and a diverse group of artists and personalities. 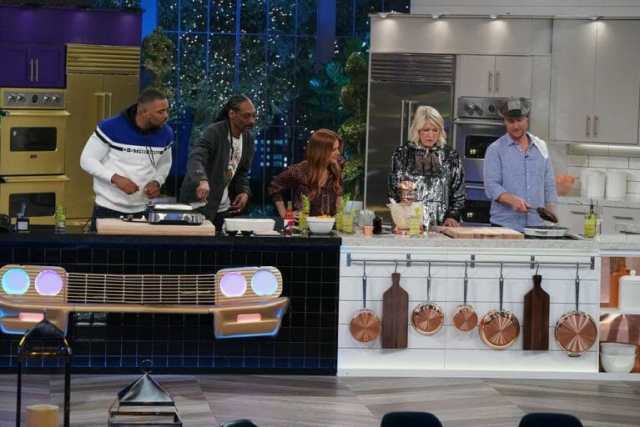 Stewart and Snoops jaw-dropping work schedules may have contributed to one of this seasons more notable changes. This year, the show will ditch weekly episodes in favor of seasonally themed specials. The first debuts on April 3 at 10pm ET and features Method Man and Matthew McConaughey duking it out to see who can create the best munchies in anticipation of 4/20. The nine subsequent specials will tentpole around holidays like Halloween and Valentines Day, although the dates for these remaining episodes have yet to be announced.

As for the shows stars, Stewart and Snoops friendship remains iconic, their odd-couple status legendary. The duo famously met back in 2008 while making mashed potatoes on Stewarts cooking show. The next year, Snoop returned to vamp his way through a segment on baking holiday brownies. Their who knew? chemistry translated to TV and in 2016, the two partnered up to debut the first iteration of Potluck Party Challenge.

The show is sustained by the sheer force of their combined charisma and benefits from excellent timing. Season 1 debuted the day before the 2016 presidential election and almost three years later, it remains sincerely enjoyable to watch two people from such different backgrounds hanging out, cooking with fellow celebrities, and enjoying a home-cooked meal.

Stewart and Snoop may share a mutual appreciation for Fieri, but theyre less united on who they would invite to a dinner party. (Snoop: Michael Jackson and James Brown, Stewart: Escoffier and Julia Child.) They also diverge when it comes to their post-show relaxation techniques. (Stewart: a night out exploring L.As extensive food scene, Snoop: sleep.)

The conversation comes around, as it sometimes does, to the topic of comfort foods. When Stewart and Snoop do find time to leave set and relax, both turn to food to unwind.

Snoop, a purist, gravitates toward an old classic, the peanut butter sandwich. No jelly. Just straight peanut butter, he clarifies.

Stewart, a minimalist, doesnt keep bread in the house: I do keep peanut butter in the fridge. Not in my fridge … In another fridge in the kitchen thats not mine.

Stewart and Snoops relationship is special, especially now that the internet has commodified friendship. Audiences are both fascinated by and skeptical of celebrity pairings, especially those with something to gain from manufacturing drama. In February, 7.5 million viewers tuned in within 24 hours to watch about the deterioration of her relationship with the Kardashians and her best friend, Kylie Jenner. The controversy appeared authentic, but nothing could stop die-hard conspiracy theorists from suggesting the spectacle had been invented to create buzz and a storyline for an upcoming season of the familys show.

When it comes to Stewart and Snoops decade-long association, however, nobody has anything negative to say. Stewart and Snoop are friendship goals, but the attainable kind. You get the feeling they dont text every day, but in person, they compliment each other as naturally as gin and juice.

This season, Stewart and Snoop will square off a total of 10 times as they and their partners compete for the shows ultimate honor, the Potluck Party Platter. The stakes are low, the tension is nonexistent, and the winners are likely to be all of us watching at home.