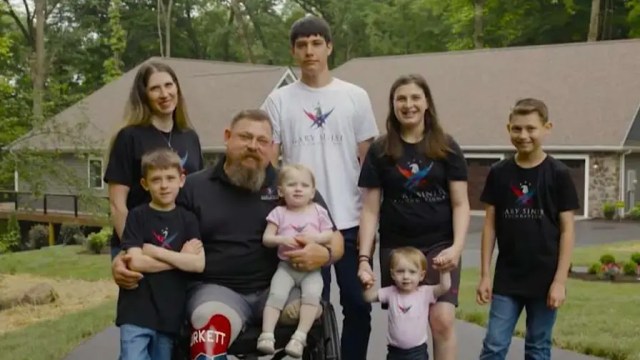 On April 11, 2012, two weeks into his sixth combat deployment, Major Eric Burkett’s V-22 Osprey tilt rotor aircraft crashed in North Africa. He was one of only two Marines to survive.

Now — after years of recovery, countless operations and the amputation of Maj. Burkett’s second leg earlier this year — he and his family are receiving a taste of independence after receiving a fully furnished, wheelchair accessible, specially adapted smart home built for them by the Gary Sinise Foundation.

On June 14 — Flag Day — Eric, his wife Melissa and their six children were given the keys to their new home and an iPad that Maj. Burkett can use to operate every part of the house and reach areas he couldn’t access from his wheelchair.

“I just want to say a quick thank you to everybody that came out to everybody that participated in this project, that prayed for us, that was with us along the way,” Melissa Burkett said to gathered donors and friends. “Friends, family, friends that we made through this adventure. Thank you, really from the bottom of my heart, thank you.”

“This is our forever home,” Maj. Burkett said, holding back tears as his six year old son Lochlen patted his arm. “There’s a master bathroom that is completely accessible.”

There are adaptive showers so that he can bathe himself and self-lowering shelves in the state-of-the-art kitchen, so that now Maj. Burkett can cook again for his family.

“The idea of getting up and moving around freely without thinking about logistics. Should I use a chair? Should I use crutches? All that’s gone,” Maj. Burkett said.

Pointing to the wall of his new home outside Pittsburgh, this Marine has a few reminders from the day that his life changed on a training mission in Morocco.

“That is actually of one of the prop rotors of the V-22 that crashed. On the back of that, I don’t know how many Marines signed that,” Burkett said.

The foundation started by actor Gary Sinise, best known for his role as Lt. Dan in the 1994 movie “Forrest Gump”, is trying to build 10 to 12 homes per year for severely injured veterans and first responders. It will hand over the keys to its 50th smart home this August.

Donations from Home Depot, JC Penny, GE, Benjamin Moore and the Semper Fi Fund among others made it possible.

Fox News first told the Burketts’ story in 2014 while he and his family were recovering at Walter Reed. He and his wife were raising their four children at the time in a set of tiny rooms at the hospital. They have since given birth to twins, Nolynn and Roawyn, who are now 18 months old. A master archer, Maj. Burkett began competing as a Paralympian in an effort to begin to heal after the crash.

“I hate shooting from a wheelchair. A lot of guys don’t mind it because you’re a little bit lower, you don’t have to worry about this instability of your legs,” Burkett said while practicing on a range near Walter Reed in 2014. “Less wind … But I hate it. I’d rather stand. I mean it does get painful at times.”

Burkett has competed across the U.S. at the Warrior Games and at the Invictus Games, founded by Prince Harry of Great Britain, and has won numerous Gold Medals for archery.

Now he has his own bow lab in his basement.

The Burketts’ 15-year-old son Keenan and 12-year-old daughter Josilyn take their brother Mastin to look for crawfish in the creek behind their new home. It’s a long way from the hospital room at Walter Reed where they lived while their father recovered from multiple surgeries and amputations.

On this Independence Day, Maj. Eric Burkett and his family raise the flag outside their new home in central Pennsylvania, a story of resilience and the generosity of Americans who are giving back to those who have served this nation.

Jennifer Griffin currently serves as a national security correspondent for FOX News Channel (FNC) and is based out of the Washington D.C. bureau. She joined the network in October 1999 as a Jerusalem-based correspondent. You can follow her on Twitter at @JenGriffinFNC.