30 Of The Best Responses To #Trashtag Challenge (New Pics)

We recently had the pleasure of sharing a really positive and useful social media challenge for once, the #Trashtag Challenge. Instead of the usual dumb and damaging crap like tide pods and people walking around blindfolded, this challenge encourages people to go out with their gloves and some trash bags, and clean up a polluted area.

Since our previous post a few days ago, the challenge has spread even further and gone truly global. Perhaps this is how we eventually manage to do something about climate change before it’s too late? It turns out that we can foster a community spirit, get off our butts and make positive change for our environment, we just need to be challenged to post pics of it on social media. Problem solved!

Scroll down to check out even more inspiring pics of people getting their hands dirty and cleaning up, and let us know what you think in the comments! 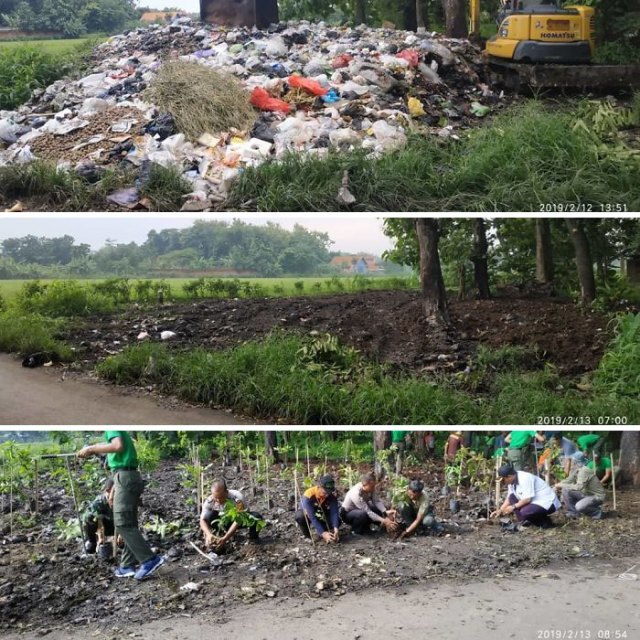 The #Trashtag challenge offers a refreshing new take on the social media challenge, with many previous iterations simply being a platform for people to show off while doing useless or destructive acts. The one most referenced is the Tidepod challenge, which caused much moral outrage and disbelief over the stupidity of those who took part.

The was also the cinnamon challenge, where people had to film themselves eating a spoon of powdered cinnamon, which can be dangerous if inhaled.

And of course there was the hot water challenge, where kids are encouraged to either drink boiling water through a straw, or pour the boiling water on a friend. One child died as a result of this challenge, and it makes you wonder what kind of people come up with these idiotic ideas that endanger the most vulnerable in our society. 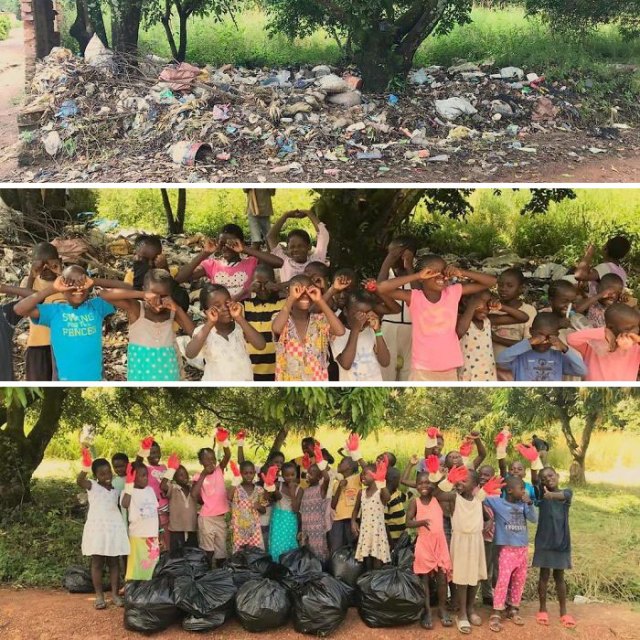 Our kids from the Karavia Children Village rocked the #trashtagchallenge yesterday! What a great action and exemple for the neighborhood 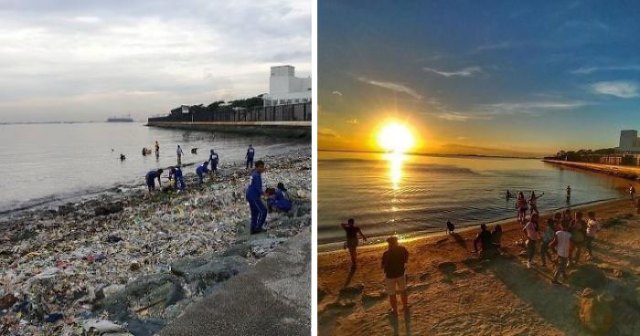 One of the biggest #trashtag of 2019. Manila Bay Philippines clean up drive.

While it may seem new, the viral trend was originally started as the ‘Trashtag Project’ back in 2015 by UCO, a company that makes outdoor gear. The initial goal of the project was to collect 10,000 pieces of trash by October 2016.

Outdoor website snews reported it at the time, writing “The UCO #TrashTag Project was conceived by UCO People ambassador, Steven Reinhold, during a period of guilt after his receipt from a self-indulgent shopping spree flew out the window.Haunted by this inadvertent littering episode, Reinhold vowed to gather 100 pieces of trash during his road trip – and he did. Returning home from his adventure, Reinhold pitched an expansion of his vision to the UCO team, and the movement began.” 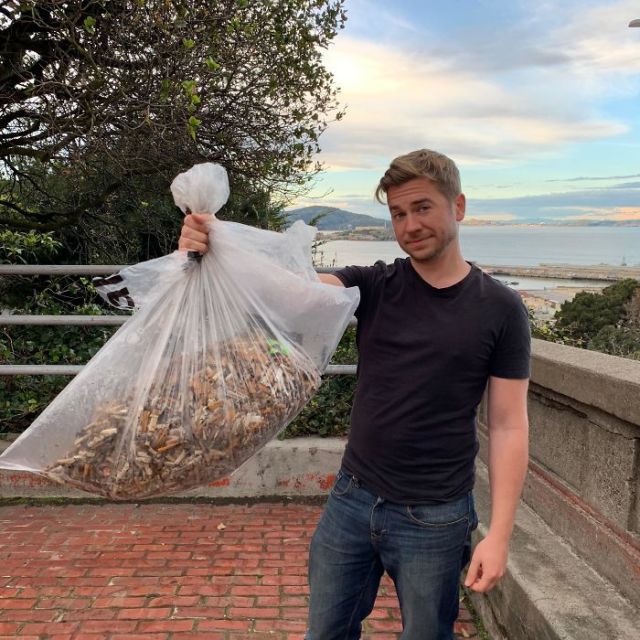 Over 8,000 cigarettes picked off the street to be recycled 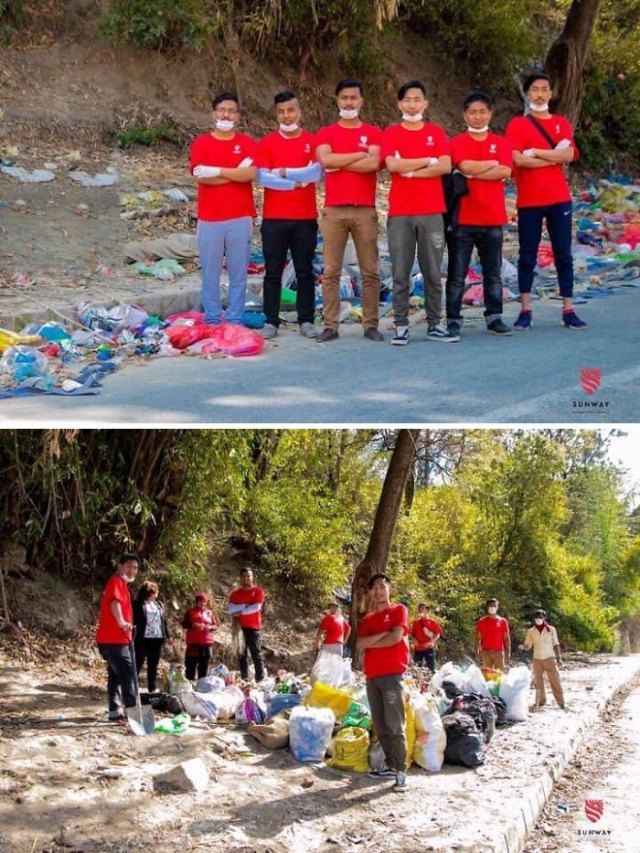 This #trashtag is really kicking off here in Nepal. I wish this doesn’t die out and become a normal day-to-day thing 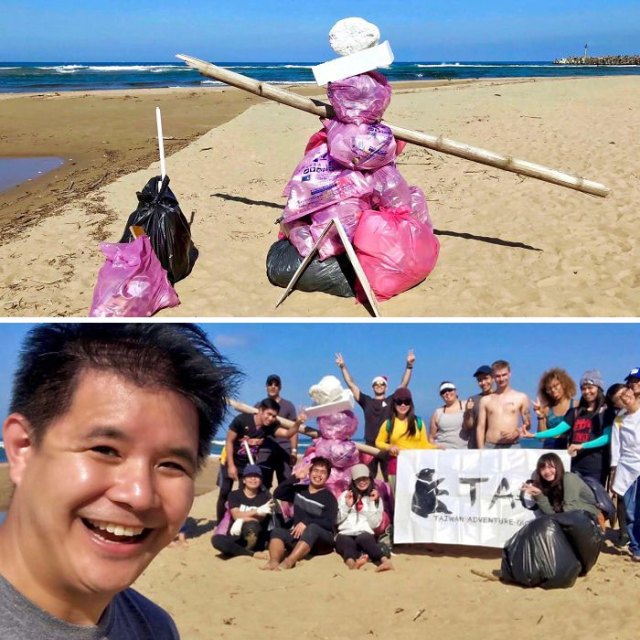 We Made A Trash Snowman At A Beach Cleanup In Taiwan! 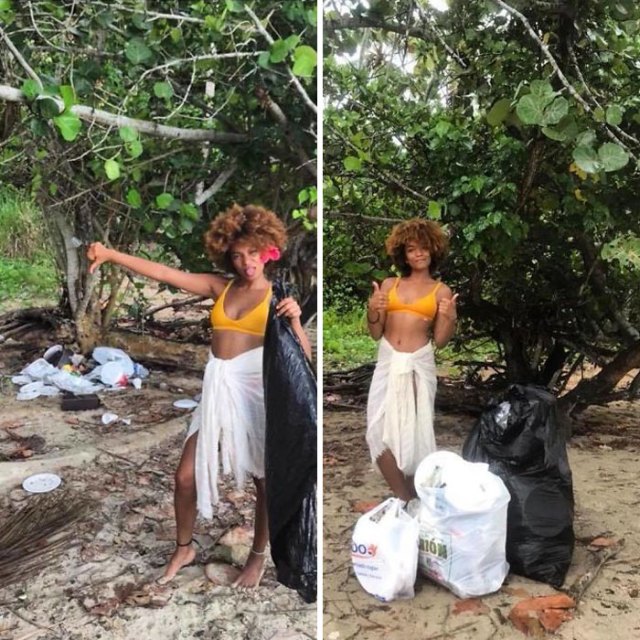 While the original #trashtag challenge was a moderate success, used over 20,000 times since 2015, it really took off this month after Arizona man Byron Roman posted photos of Algerian Drici Tani Younes. The first one showed Younes surrounded by garbage and then a second one had him standing in the same place behind nine filled trash bags. Roman suggested this would be the perfect “new challenge for all you bored teens,” and it simply took off from there. Now it’s a truly global phenomenon! 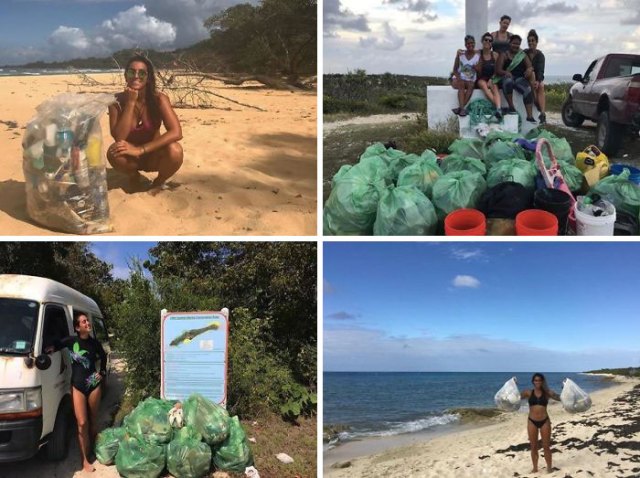 This woman has dedicated the last year and a half of her life to cleaning up polluted coasts, way before #trashtag was a thing. Currently, she is in Central America continuing her efforts. More people like this deserve recognition 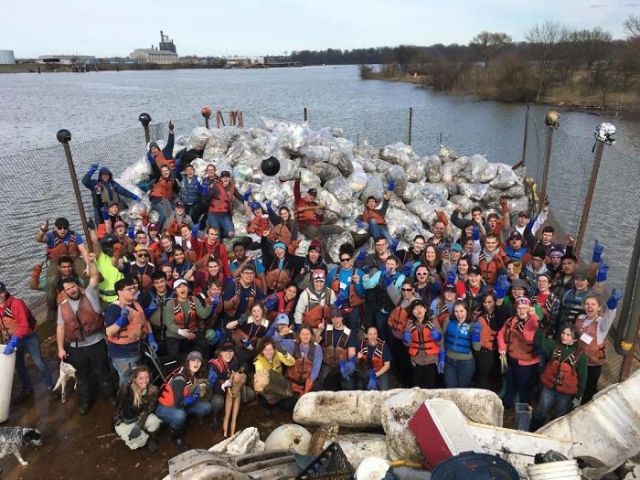 Living Lands & Waters cleaned up 14,353lbs of trash from the Mississippi River (in Memphis) just yesterday! 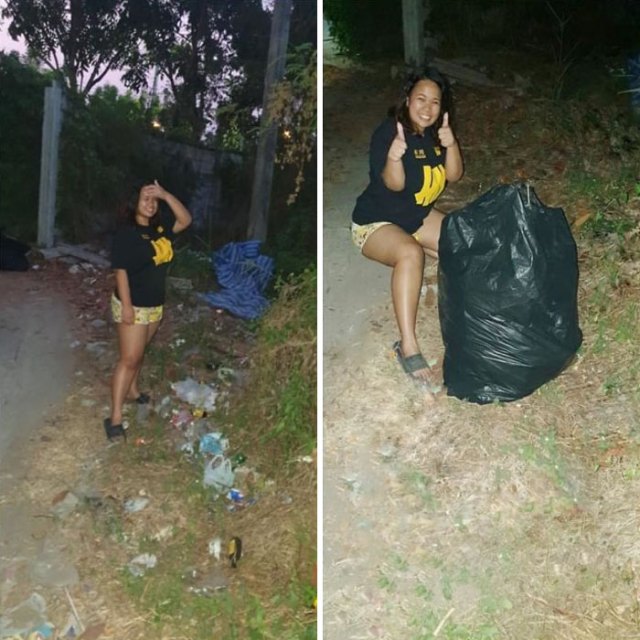 I can’t change the world but I totally changed mine 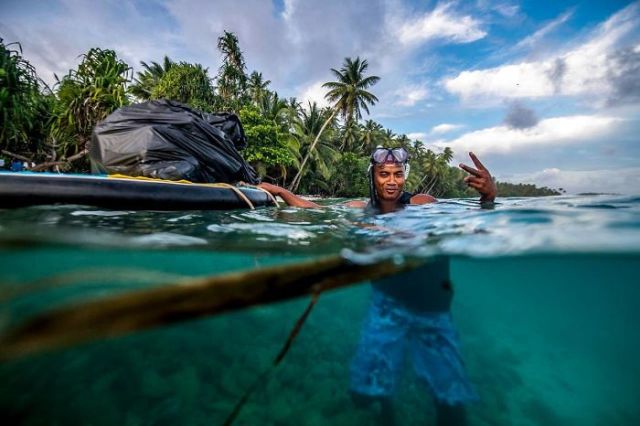 Okeanos Foundation for the Sea doing our part for #trashtag 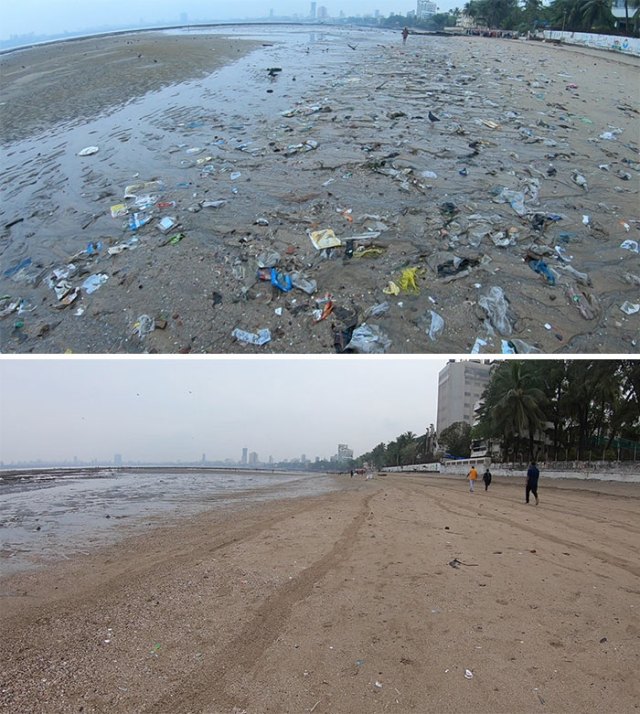 The #TrashTag Challenge is an excellent reminder of how cleanliness can enable communities and the environment to Rise.

Watch how Mahindra employees came together for a cleaner country here 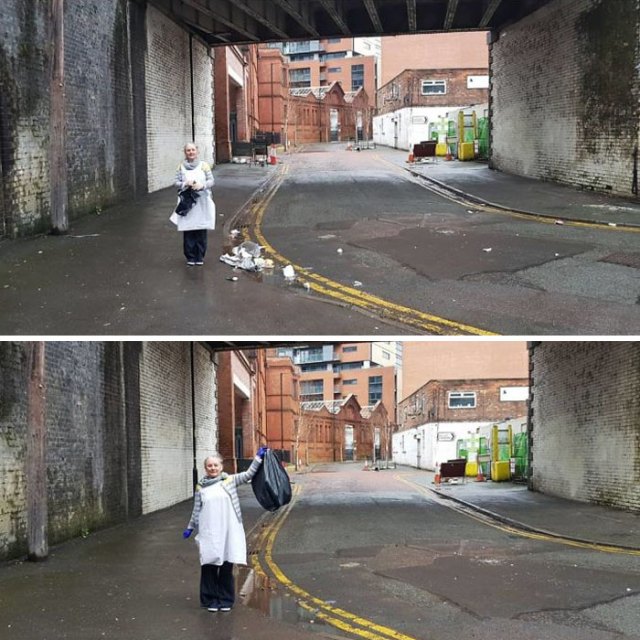 #trashtag challenge is one of the social media hashtags worth time and effort.

It urges people to pick a place filled with litter, clean it up, and post before and after pictures.

Volunteers have made beaches, parks and roads trash-free while raising awareness of the quantity of plastic litter we produce. Here is mine – Manchester’s Mirabel Street. During strong winds and after events at Manchester’s Arena our little corner gets a full blast of litter droped by passing by people. 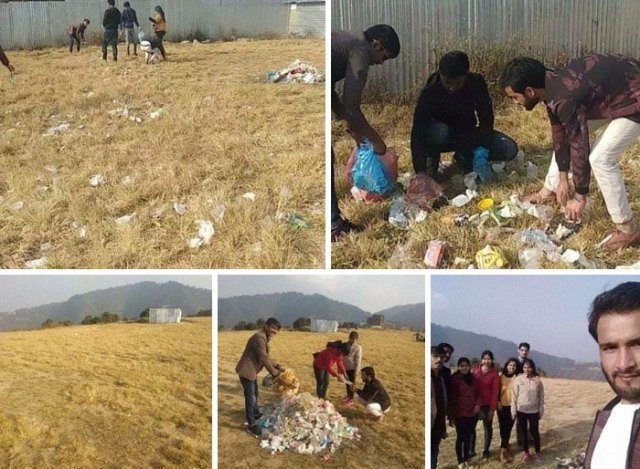 Everyday hundreds of youth are cleaning up the country. This #trashtag challenge if continued in great magnitude can really help solve hundreds of environmental problems. This picture is from the students of highschool named KMC from Kathmandu, Nepal. 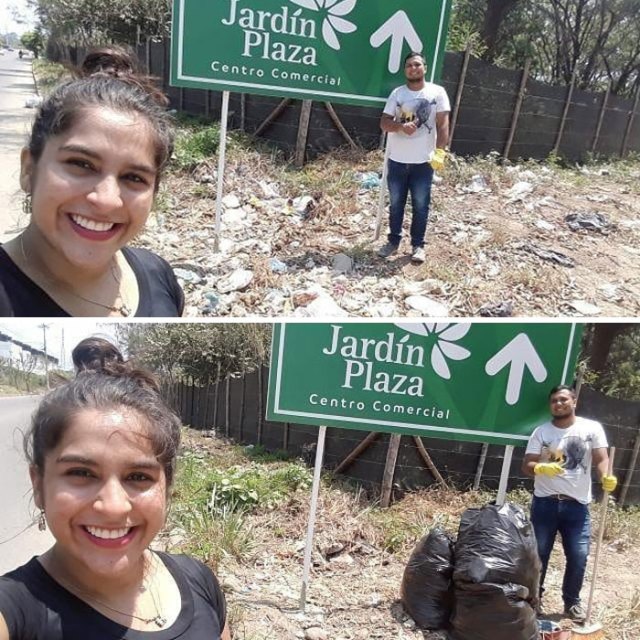 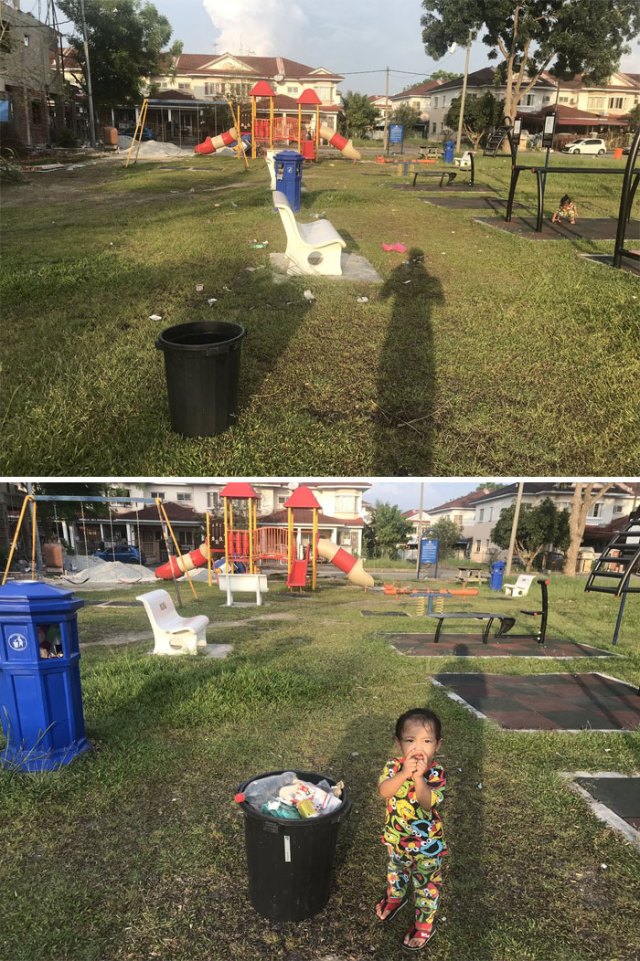 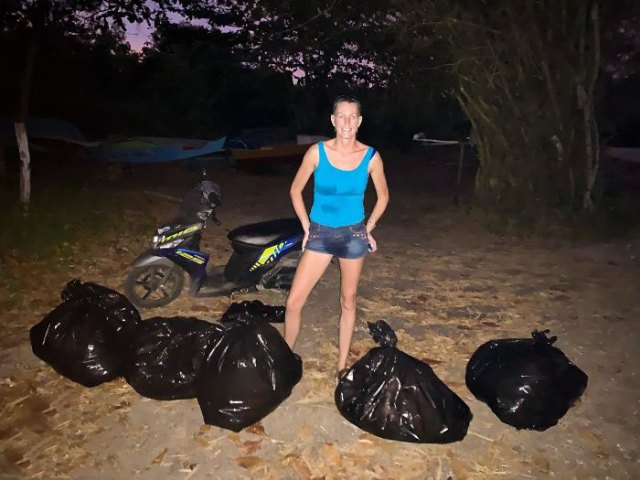 I wanted to give back to the Filipino community who has been so kind to me; I spent 6 hours at a “local’s” beach and cleaned it up a bit. I know it’s not a lot, but It’s a small way of saying “thank you.” #trashtag 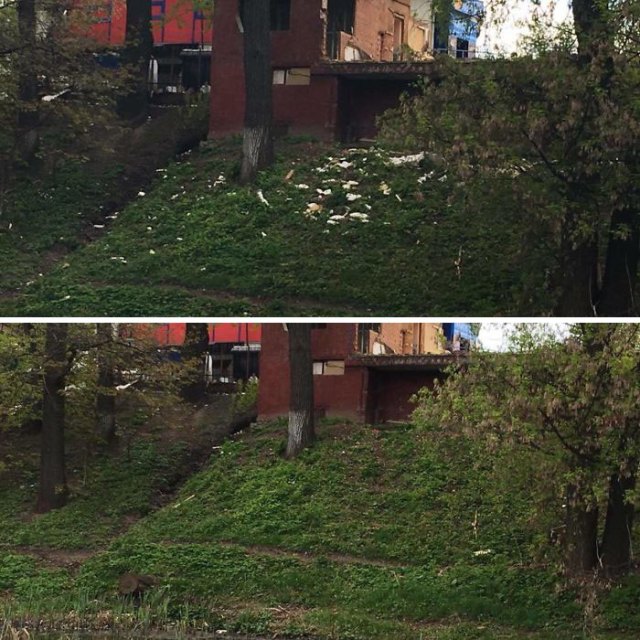 I heard #trashtag is getting popular. Kiev, Ukraine 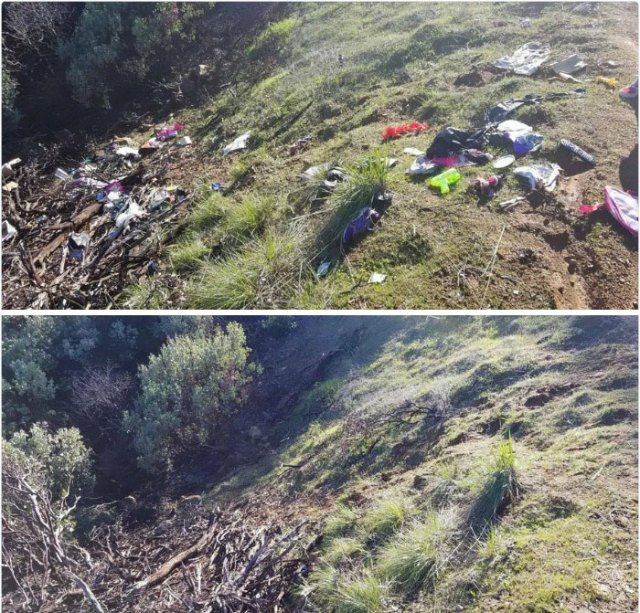 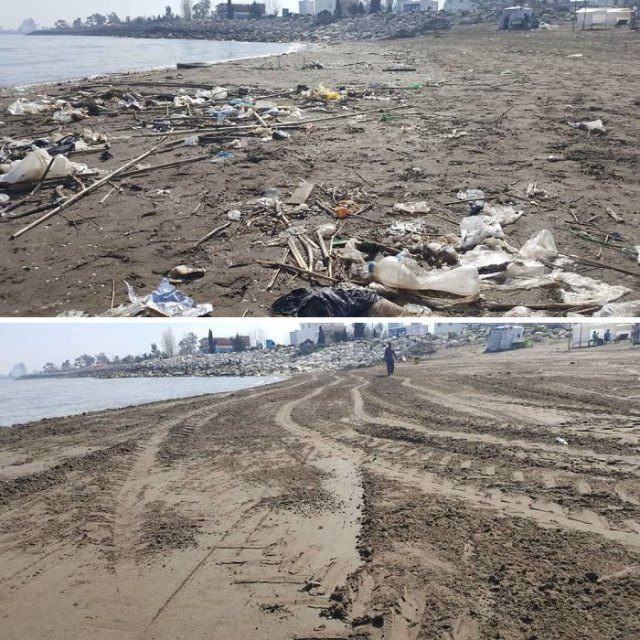 Tried to do something better then nothing 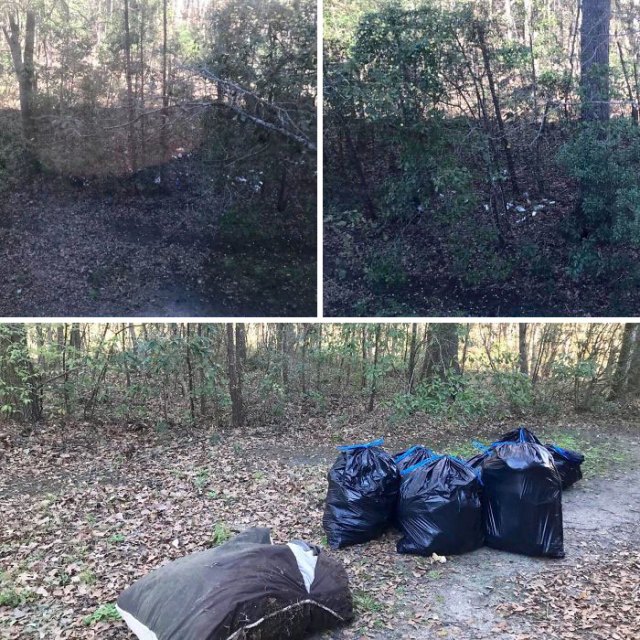 One boombox, one dog bed and nine trash bags later and the woods next to my apartment building look a hundred times better. the top photos are the view from my kitchen window and now I no longer have to look at trash! 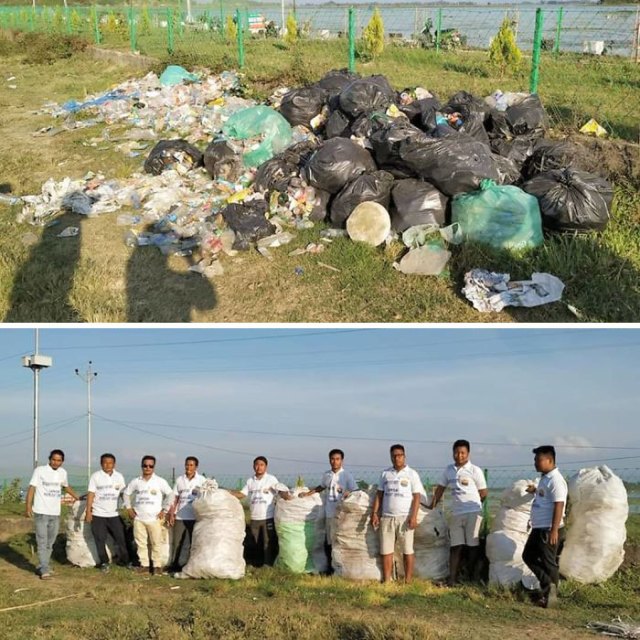 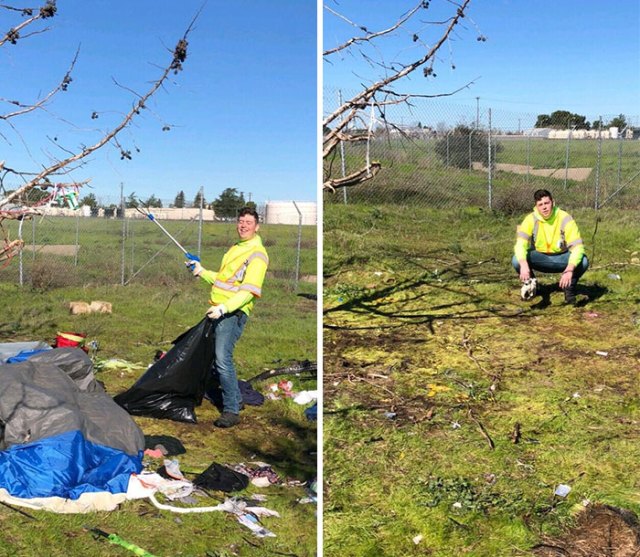 Cleaning up homeless camps! #trashtag 260 kgs, only took about an hour! 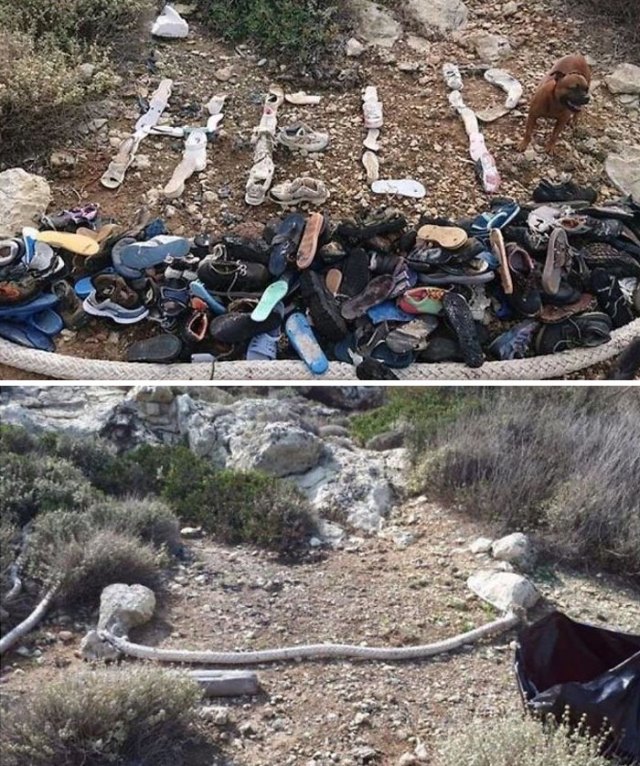 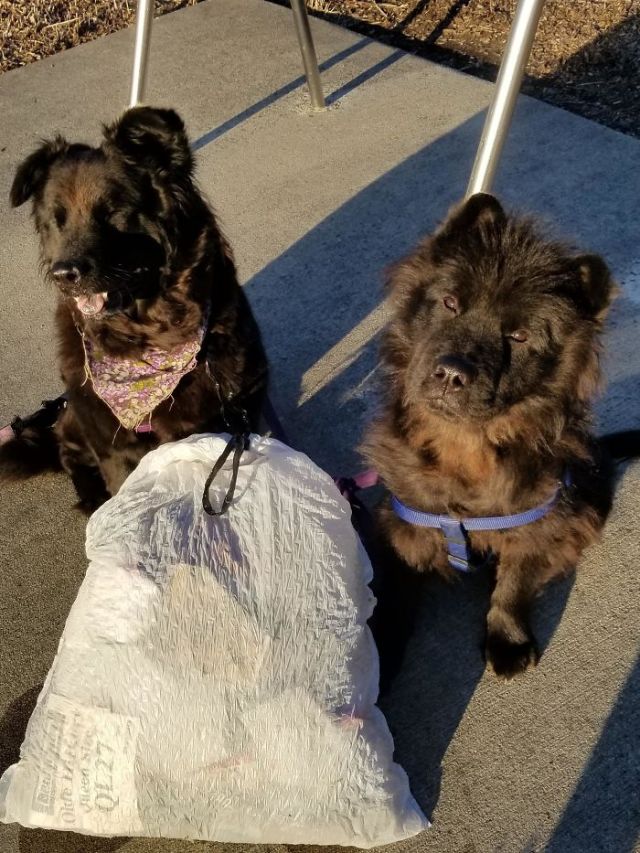 We got inspired by all the other trashtag posts. Cleaned up a 3 mile section on our local trail 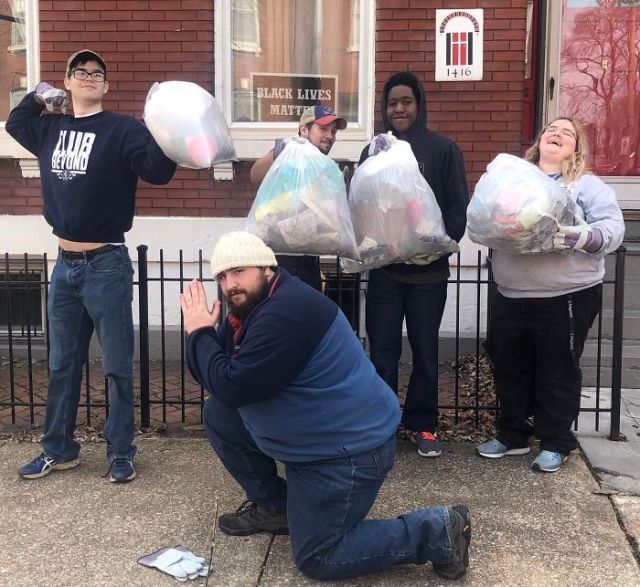 The KU Canterbury house decided to spend our spring break picking up trash on the streets of St. Louis! 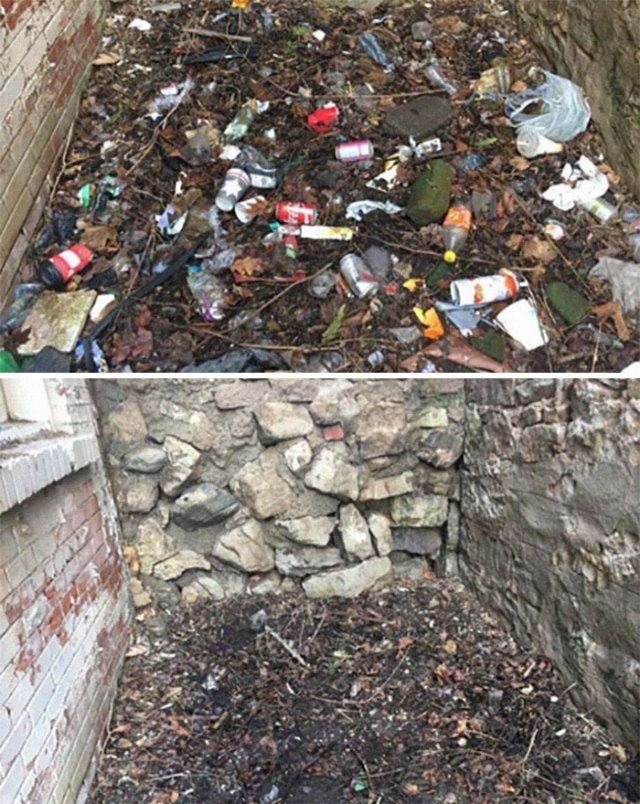 Before and after. Makeup and clothes dumped near Moston Brook, now cleaned up 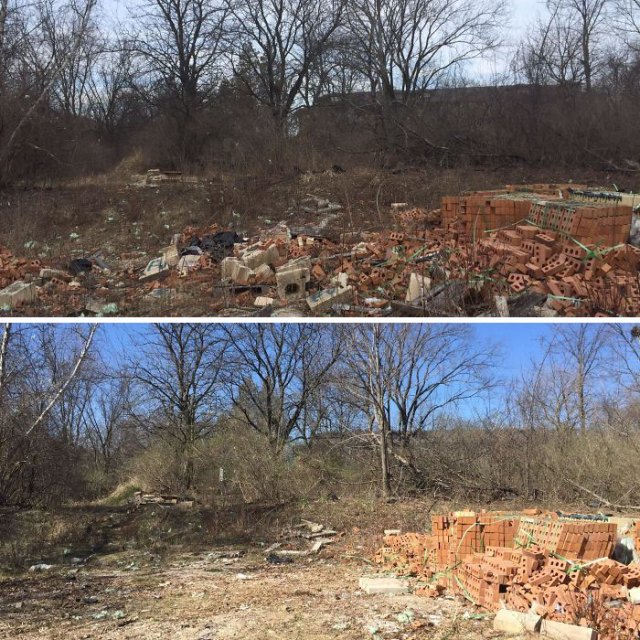 A pile of bricks by this path behind my local Walmart always bothered me. A couple years ago I got bored and made it less sh**ty. #Trashtag proves we can make the world a more beautiful place